Salmon returning home to Alaska hatcheries again accounted for nearly one-third of the 2021 statewide catch for commercial fishermen at 64 million fish. It was the 8th largest hatchery home-coming since 1977 and at a payout of $142 million, the salmon produced 25% of the overall value at the Alaska docks.

An additional 220-thousand salmon that got their start in a hatchery also were caught in Alaska sport, personal use and subsistence fisheries.

Nearly 70 million adult hatchery salmon returned last year, according to the annual salmon enhancement report by the Alaska Dept. of Fish and Game. Pinks comprised the bulk of the pack topping 57 million, followed by chum salmon at 9.4 million.

Currently, 30 salmon hatcheries operate in Alaska. Twenty-six are operated by private nonprofit corporations and are funded primarily from the sale of a portion of the returning fish. Of these, 11 are state-owned and operate at no cost to Alaska. The state also operates two sport fish hatcheries, one research hatchery is run by NOAA Fisheries, and the Metlakatla Indian Community also owns and operates a hatchery.

Prince William Sound had the highest number of hatchery returns in 2021 at 48.2 million salmon. Nearly 40 million were caught in the commercial fisheries, worth almost $68 million to fishermen, or 62% of the dockside value. Pink salmon contributed the most at $49 million.

Kodiak ranked second for hatchery salmon returns at 11.6 million fish. That produced a catch of more than eight million fish worth $10 million to fishermen. Pink salmon contributed most to the value at over $8 million, followed by sockeyes at $1.5 million.

Southeast Alaska had a total return of 8.2 million hatchery salmon and nearly five million were caught valued at $32 million to fishermen, or 27% of the region’s dockside value.

Since 1995, annual releases by Alaska’s combined hatcheries have ranged from 1.4 to 1.8 billion juvenile salmon

Alaska hatchery operators expect a total return of just over 44  million salmon in 2022. 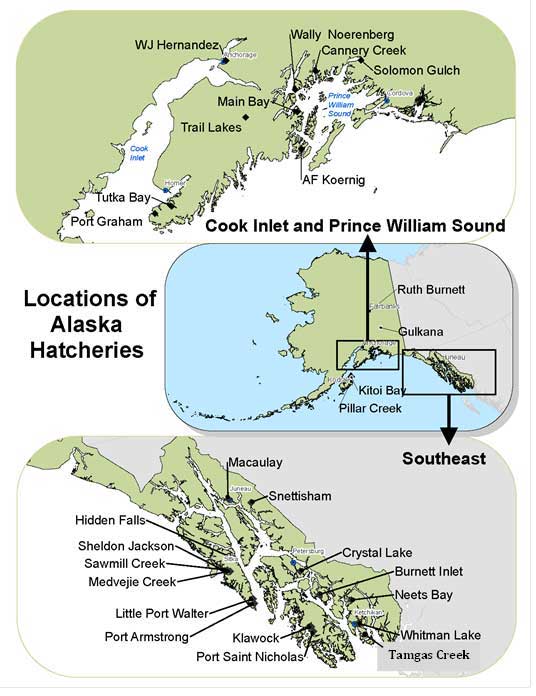 Want to stay updated with the latest prices? Sign up for The Fish Ticket, a weekly market report delivered to your inbox.